A 600K in February? Oh, you betcha. Just ask the gaggle of randonneurs who signed up for Tony Goodnight's Weekend 'O Brevets, held Feb. 5-6 in Lumberton, NC.
Riders had their pick of a 200, 300, 400 or 600K. Two riders, Steve A and Jimmy W, traded up to the 600K upon arrival in Lumberton, scrambling at the last minute to round up an extra pair of shorts from fellow riders.
Ten 600K riders, including your humble reporter, headed out and 10 riders finished on a flat course that followed a circuitous route through North Carolina's coastal plain. A hard rain could not dampen our spirits but everything else got a good soaking. We were our own weather system, depositing large puddles inside several Eastern North Carolina establishments.
Our course cut through the fatback of hog country, including Bladen and Duplin County. While we didn't see the sausage being made, we were able to chow down on some at a strategically placed Waffle House just outside Sunset Beach.
A few highlights from a special weekend on the bikes:
Thanks to all for two great days on the bikes. A few more pix below.

Edit: Joe P has provided song lyrics to commemorate the ride. They're sung to a song about a famous North Carolina train wreck.... 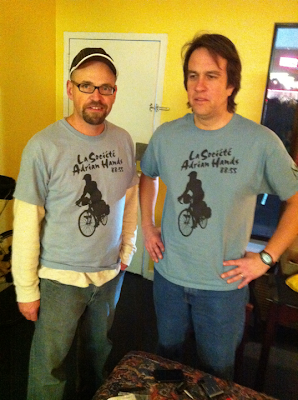 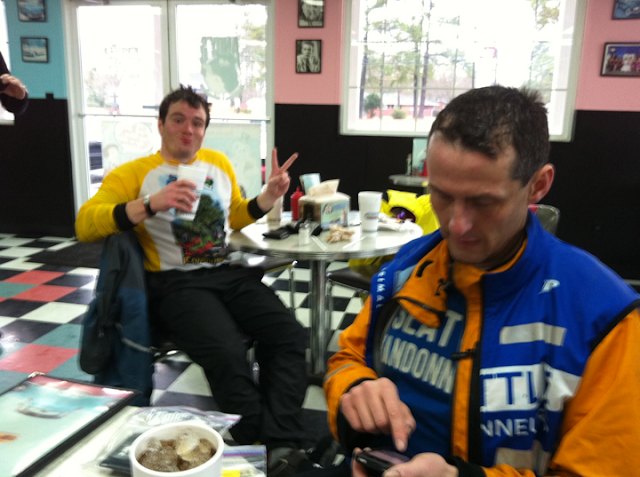 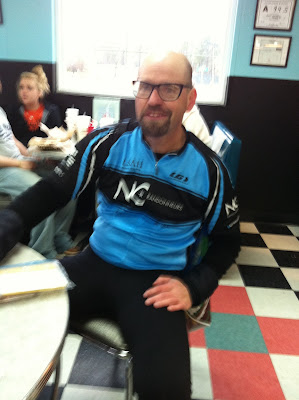 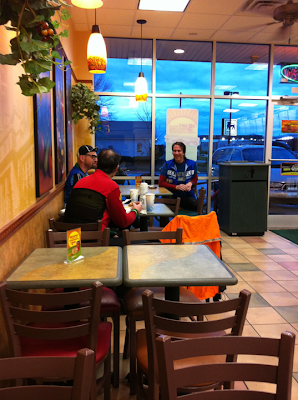 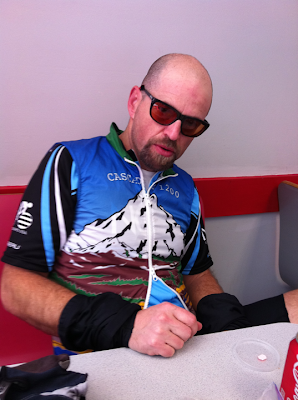 Email ThisBlogThis!Share to TwitterShare to FacebookShare to Pinterest
Labels: 2011 rides

You guys are tough hombres

OK, you think my sprints are bad, you should see my climbs! Luckily for me, Tony didn't include any.

Thanks to all for the wonderful hospitality and for the great company on the ride. (Same bodily function jokes as at home, but a different accent made them all new again.)

Well said Flyer as usual. I'm up at this hour because 4 hours of sleep seems completely adequate after that weekend of deprivation. Did you notice anything unusual about those guys from Seattle? I didn't know that had a different language out there. Anyway they were loads of fun and it was great having them along for the ride. They really liked our dogs. I kinda think they don't have so many back home. Poor fellas. We should have them back again. Next time let's not put them in charge of the weather on day one.

As you might guess, I'm sitting in Starbucks catching up on the news. Well really I'm just avoiding unpacking the "dry bag" with all the stink in it.

I told my daughter about the pig stink. She asked calmly, "what do you think the pigs said about you and your friends?"

It was a bit hard understanding the conversation out there. Remember all that expectant talk about bacon as we got closer and closer to the Waffle House? It sounded glorious and was quite the build up.

I heard all that conversation as how competitive the sprint to the on-ramp sign was. I hope my translation will be better in Paris. That's my story, and I'm sticking to it.

You guys know how to roll.

Come play on the west coast any time.