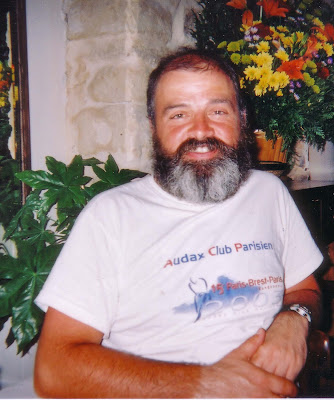 Our good friend Adrian Hands, who suffered from ALS for the past several years but who carried on with great enthusiasm, has passed away, his son Ian has announced.

My father passed away today. He meant everything to me, and I know he meant a lot to some of the folks on this list. What should a Yo Adrian! admirer do now? Ride a bike of course. Personally I plan to do just that.

Someone close told me to be sure and find time to let myself heal... I'll heal on the bike I said, and I will have plenty of time indeed. Can't think of a better way to clear my head. I think Yo A would approve.

My dad LOVED his friends so much! Thanks everyone who befriended him.

Smile a smile for him please.


Adrian was the soul of our randonneuring group, and he'll be with us on all future brevets.

Last year, the North Carolina Randonneurs set up the Adrian Hands Society in Adrian's honor. From that site:


Adrian Hands is a tireless bicycle advocate and 2003 Paris Brest Paris Ancien who embodies the philosophy that every ride is an adventure. He has traveled far and wide to pursue his love of randonneuring, including brevets in China and Bulgaria. He successfully completed PBP in 2003 with a time of 88:55. His ride report of that adventure stands as one of the best accounts ever of this legendary event.

In 2005, Adrian was diagnosed with a neurodegenerative disorder, later determined to be ALS (Amyotrophic Lateral Sclerosis), which caused him to lose a significant amount of upper extremity strength. In his characteristic joie de vivre, Adrian switched to a recumbent cycle and successfully qualified for PBP in 2007. Although he retired in Loudeac during the return trip from Brest in 2007 his courage, determination and adventurous spirit should inspire us all.

May Yo Adrian rest in peace, and our thoughts go out to his family and worldwide friends.


Edit: Sridhar posted this to the NC Rando listserv.

I spoke to Padmini [Adrian's wife] a few minutes back. She said that his bipap ventilator failed and by the time it was discovered, it was too late. Cremation is set for 3 PM local time today Feb 3, 4.30 AM EST. As valiantly as Adrian fought the good fight against ALS, please also spare a thought and prayer for his absolutely fantastic wife -- Padmini. A human dynamo, if I ever saw one. Just seeing some of the things she had to deal with and dealing with it in her saree-clad zen-like calm disposition was an absolute inspiration.  It was through her and their then-elementary school daughter Shanti that I first came in contact with a triple-chin, overweight specimen called Adrian Hands, circa 1998, 1999. When they had come over once, I casually mentioned about some of the bicycle tours I had recently done in Colorado and other places. Next thing I knew, he and I were hauling our bikes in his monstrous Ford Econoline (can anyone believe that he'd drive such a monster) to Cole Plaza to ride in Maureen Kurtz's Tarwheel rides. Yeah, and he would chomp on Planters Nuts the whole way and back.

Well, all that soon changed. He was diagnosed with diabetes and was read the riot act. Overnight, he almost paid his boss to haul his Econoline away and ceremoniously cancelled his auto insurance with a vow to never own a automobile again, You all know the rest. I had the pleasure and honor of riding with him in hundreds of rides, often just him and me oh-so proudly lantern-rouging our way to the finish. Way back in 2002, he and I did our very first 400k, when Matt Settle was running the Spartanburg series and on the the way back from the turnaround in N. Toccoa, GA -- he and I somehow got separated. Hard as it may to be believe, I was "way ahead", but Adrian went back to look for me and put in dozens of additional miles, something we desperately didn't need to do. I always enjoyed eating real meals with him  on these rides and this time it was no different -- after our fill in Seneca, SC, we wended our way through the SC countryside in pitch darkness, at which point Adrian said he just couldn't keep his eyes open and was "seeing" things. I didn't get it then, as I did in subsequent years that special 400k hallucinatory stare....Well, he rested for all of 10 min and then somehow moseyed on. What could I do? I simply followed his lead and somehow we made it to the finish a few min before cutoff.

I don't think he ever bought a new bike, but generously invested in used bikes and refurbished it like it was some rare treasure. I always wondered why Miles Whelen loved him more than he loved me -- considering I commissioned an expensive custom bike from him; Miles, one day quietly asserted that YoA's munificence towards North Rd Cycling far exceeded mine. I don't doubt it. Adrian was a major presence not only with the randos but with numerous other cycling teams -- MSing Links (where he hosted its website for years), Tarwheels, NCBC, a co-host of the Monday night rides from North Road Cycling in the halcyon days and of course those bicycle camping trips to Kerr Lake, Cliffs of the Neuse and various other points -- on each of these trips it was YoA that embodied the life and spirit. With his encouraging smile, he'd lift up sagging spirits and somehow willed the rest of us to the next stop. He was a tireless volunteer with NCBC, Tarwheels, the Frostbite Tour and various other Gilbert-induced boondoggles. He went to some Chinese event in Raleigh, won some raffle towards a trip to China and then does only what he'd do. Take a trip to Shanghai to do a 200K brevet.  Oh, what a guy!!

I took some of my MSing Links friends to see him after the Halloween Ride this past Oct 31 -- and you'd have thought he wouldn't have been out of it with the sight of so many of us. He bantered and reminisced with every one of us, recounting the trivial and the profound from events long since receded into distant memory. An indomitable spirit, cliched as it sounds, applied to Adrian in spades. Many of you know the many things he did to promote bicycle advocacy and to the extent things are better today than in years past, let's doff our cap to him.


Adrian, you sure made all our lives just that little bit better, a yearning that most of us only dream about. Rest well, my friend -- you have earned it!!


Edit 2-4-11: A note from Dr. Codfish to members of the Adrian Hands Society:


My visual is Adrian dropping off the back; as we pull away I look back and see that smile as he contemplates a turn to follow another, less traveled but no less interesting route.

Others will better eulogize him than I. We never met so I wasn't blessed with that warm smile and those discussions on bike philosophy and culture. But we did correspond and I read his writing, enough that I could see where our thoughts intersected, ran parallel or where we diverged, I felt connected. Why does it matter that Adrian is gone?  He was part of what we loved.  Because of the unique way in which he engaged in, embraced, and championed bike culture, and that small jolt of 'little kid' joy we all get whenever we swing a leg over and push off for another dose of bike time.  He was one of us and more, he was a model of sorts and in that we loved him.

A model you say? Adrian stands forever as evidence that you don't have to be at the front to lead.  It is not only the Lance Armstrong's of the world that inspire, that bring others to the world of pedals, and cogs, and spokes.  How many can ever win the Tour de France?  More by millions can ride at the back of the pack, can share a kind word or smile, can gently point out that a bicycle might be a perfectly reasonable means to 'get there'.  So long as I can remember that, remember that the 'wrong' turn might actually be the right choice if I can adjust my notion of what the goal might be, then I will always have Adrian with me.

A long ride is definitely in order, but consider making it a slow ride, and forget about a cue sheet or your usually contemplation route.  when you get out there a way, start looking for that turn, up that road you have always ridden past.  Find a place you haven't seen before, go there, make that turn and ride that road, slowly.  Really see it, and you will always remember Adrian whenever you find yourself on a road you may have discovered accidentally.  Perhaps in his memory I'll make a point of absentmindedly leave something behind along the way.

Thank you for this fitting tribute to Adrian. I was the lucky recipient of Adrian's visit to China to ride my Randonneurs of China innagural brevet.

I will miss you Adrian. Ride Long and Prosper.

Another great one leaves this earth too soon. I'm sorry I never met you, Adrian. You sound like an amazing person. I knew you only by reputation and from your tweets from NC and India. My best wishes to everyone you left behind.

I'm sorry to hear of your loss. Randonneuring in the US has lost some important members recently.

A cycling advocate like Adrian is far more valuable than a Lance Armstrong.