On Monday, March 2nd, I was in the throes of a particularly nasty head cold I picked up while riding the Harrisburg 300km on February 21st. While sniffling and hacking and generally feeling miserable, an email came across my laptop that made me decide to get well there and then. John Morris wrote offering a ride in his Cesna 4-seater to Central Florida for the 400km brevet on March 7th. I have to admit, I was more intrigued by the plane ride than the bike ride, but I thought I would be well enough to complete what I imagined was a fairly flat brevet.

As the week went on, my condition improved and I wrote John to say I was in for sure. On Friday, we met at Lakeridge Airport just north of Durham between Redwood Road and Falls Lake around noon. John had already pulled the plane out of the hanger, had it gassed up and was ready to go when I arrived. After a few minutes to load my bike in the back of the plane on top of the folded down rear seats, we climbed in and took off—no security check, no surly gate agents. Just climb in, strap myself to the seat, and hold on tight for a thrilling take off. Shortly after we were airborne, I looked out the starboard window to see a bald eagle soaring below—a harbinger of good karma for the flight and the ride as it turned out. 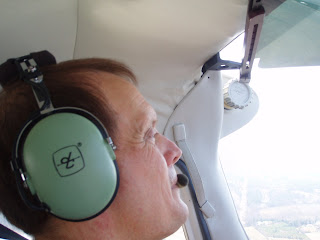 The flight down was a pleasure. After a few dozen questions about the instruments, the engine size and power, fuel capacity and consumption, GPS, auto-pilot, etc. etc., John allowed me to take the controls for a few minutes. Minor adjustments and a light touch on the stick are all that are needed to keep the plane level and straight. I managed to keep us in the air and upright. After that, John engaged the auto pilot which employed the GPS to keep us on our flight path from beacon to beacon avoiding military and controlled air spaces where we would have needed permission to fly through. We passed over my home near Jordan Lake and many familiar sights. 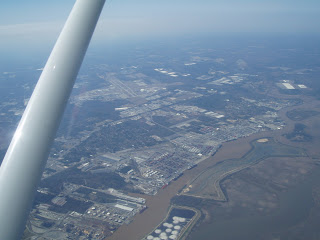 The Cooper River in Charleston

The four-hour flight ended at a grass strip in Eustice, FL much like Lakeridge. We unloaded and reassembled the bikes, and make quick work of the 4-5 mile ride to the home of John’s brother-in-law Ted, and his wife Marjorie. We saw nothing but flat land and orange groves on our short ride. After meeting them and enjoying a glass of wine, the four of us visited a very good Mexican restaurant in the near-by town of Mt. Dora. Ted and Marjorie gave us a quick tour of the area and showed us the route to the hotel that marked the ride start. I turned in early, around 9 o’clock, for the early 4 AM wake up. 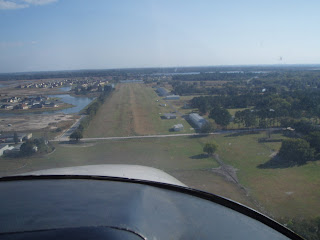 Surprisingly, I slept well—something that rarely happens the night before a brevet. John and I arrived at the start around 4:30. Tim Bol, the Central Florida RBA, was there checking riders in. A crowd of about 25 assembled for the 5 AM departure. I reacquainted myself with Wayne Phelps and Melanie Ashby who rode the Morrisville 600km last year and Judith Longley who I met at the Last Chance 1200km. Just before the ride start I heard the bad news that Jim Elder, another 2008 Morrisville 600km veteran, had been hit by a car a couple of weeks before—he is recovering but will not be able to ride for a while. 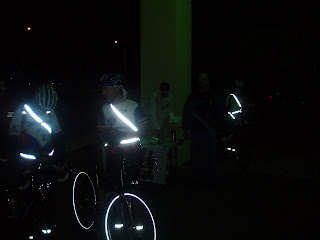 All aglow at 5 AM

We departed together but the group quickly splintered into a couple of different paces. John and I went out with the fast crowd. We reached Thrill Hill Road and here I began to wonder if bringing the single speed had been a wise choice. We reached the bottom of the short, fast descent, only to have the road pitch upward at a very steep angle, but in the dark still, I couldn’t see just how steep. Wayne and Melanie were on a new Calfee tandem. They ground to a halt and weren’t able to unclip before taking a spill. Fortunately, no one was directly in their path and we were all able to avoid them. They started rolling again and all the riders regrouped at the top of the climb—I suspect mostly to allow the tandem to get on the front again and allow the rest of us to draft.

The morning was chilly and I was thankful that I had the foresight to pack arm and knee warmers. But shortly after, the sun rose on what would be a glorious day, the temperature started to climb and eventually reached a comfortable 80 degrees. I’ve never ridden a brevet in March at that temperature. Soon someone on the front ramped up the pace and the grouped splintered again. By now, Judith had informed that there would be about 50 miles of the course reminiscent of the hills in northern Georgia. I had the sense to let the fast group go and settled in at a comfortable pace.

A group of nine of us reached the first control at mile 56 after the fast guys were long gone. The control was staffed by a volunteer and was supplied with food and drinks. In fact, all but one of the controls had volunteers taking care of the riders. About 20 miles after the first control, our group caught up with John, who had lost contact with the front group while trying to eat a pop-tart. He too thought better of trying to chase them down. Next came the first hilly section and our small group further fragmented. If I had bothered to study the cue sheet before I left home, I would have seen road names such as Center Hill Road, Buckhill Road and Sugarloaf Mountain Road—maybe that would have swayed me into taking a different bike. These hills are as steep and as long as any we have in central North Carolina.

This region is evidently a favorite training site for cyclists—the hills were covered with them. After about 30 pedal revolutions up Sugarloaf, the 17 tooth cog on the other side of my wheel was calling me, so I stopped for a quick flip. The brief pause also allowed my heart to re-seat itself in my ribcage. At the top, many cyclists had gathered to refill bottles on the side of the road. It seems a non-cyclist who lives at the summit takes it upon himself to put out two large containers of water every Saturday with a sign that says, “Help Yourself.” A few miles later we came upon Tim and another volunteer at the 2nd control—Mile 112. 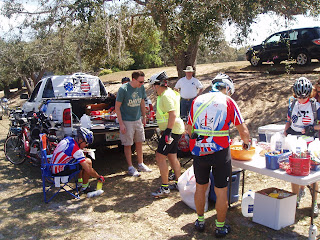 The ride is arranged in a series of loops such that we were rarely more than 20 miles from the start. Judith, John and I left the control together to take on another 10 miles of hills and returned back to the same spot. The second time through does not mark a control, but it is a great opportunity to refill bottles. During another short hilly section, Judith took a spill when she was unable to unclip at a busy intersection. She was using a new pedal and cleat combination as a result of a nagging hip problem she developed after her very fast 65 hour performance at the Last Chance 1200—an awesome time. She hopped right up without injury and was ready to ride in seconds. A few more hills put us on a 20 mile pancake-flat bike path that goes through the charming community of Winter Garden and later, Apopka. Some parts of the trail were very busy with cyclists, joggers, roller-bladers and families out enjoying the early spring weather. The end of the trail is at about mile 150—just a century to go! 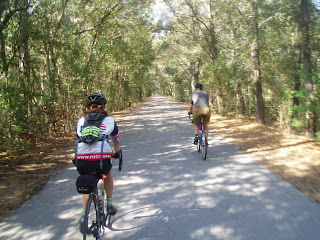 Judith and John on the 20-mile bike path.

The three of us reached the 3rd control at mile 165 in Tangerine and we decided to take an extended dinner stop. Our previous riding partners cruised in as we were leaving. We soon entered the hilly section again, but this time from the reverse. Minutes before the climb up the backside of Sugarloaf, Mike Dayton called to see how we were doing. He and some other friends had just finished the Yanceyville Ramble Permanent. Fortunately Mike’s timing was perfect as I hung up just before the steep part of the climb began. The back side of Sugarloaf is a much easier climb. Tim was waiting at the top at a secret control (Mile 185). With all the loops and doubling back on the same roads, it would be easy and perhaps tempting for someone to short-cut the route in this area. 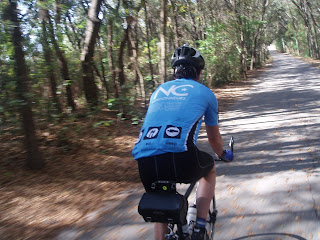 Best Looking Jersey of the Day (Thanks to Branson Kimball)

We screamed down Sugarloaf at about 42 mph into the setting sun. Smaller rollers continued for several miles ending at Hospital Hill. From there, the terrain was mostly flat again with only a couple of climbs in the final 50 miles. Traffic was tough in one section, but we were soon out in the country again with few cars, a near full moon, a pleasant temperature and good company.

A quick stop for ice cream and water at the control in Mascotte (Mile 221) was followed by what seemed to be the slowest 30 miles of the day. I suspect all three of us were quietly suffering and just wanting the ride to end. I admit that I saw several churches with inviting looking front porches, and had I been alone, I surely would have stopped for a nap. Pedal stroke after pedal stroke finally got us back to the Eustice/Tavares Days Inn, but not a moment too soon. We arrived at the hotel around 11:40 PM for an elapsed time of 18 hours and 40 minutes, which is about average for me for 400km. John and I quickly signed our cards, stopped at Denny’s for a big breakfast, and made the short but chilly ride back to Ted and Marjorie’s. After a glorious hot shower I collapsed into bed about 1:00 AM.

The next morning, having lost an hour due to Daylight Savings Time, we said goodbye to Ted who was off for a day of sailing with this club at one of the thousand lakes in the area. Marjorie, John, Robert (Ted and Marjorie’s son), and I decided to go out for breakfast. John’s idea was for us to ride our bikes to breakfast and then to the airport, but frankly I didn’t want any part of that. A quick look in the back of Marjorie’s van convinced me that two bikes would fit easily—and it didn’t take a great deal of effort to convince John either.

Sunday was another beautiful day to fly. After gassing up the plane, John did a quick check of the systems, we taxied to the end of the strip and were airborne in seconds. A distinct tail-wind pushed us home about an hour faster than the trip down. After passing through Savannah, GA airspace, John selected the Horace Williams Airport beacon in Chapel Hill and the GPS and autopilot did the rest. We enjoyed the views and a smooth flight until we started making our descent and turn to the northeast to land at Lakeridge. John is a skilled pilot with visual and instrument flight certification—I would be happy to fly with him again, anytime, even if I have to ride my bike 250 miles for the pleasure. 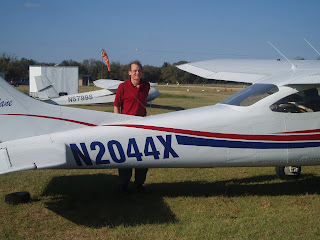 Thanks for the great write-up, Jerry. I too enjoyed the flight, the company, and the ride. I think that calling Sugarloaf a mountain is a stretch, (elevation 312 feet)but it certainly was not a flat ride! The local club riders were duly impressed to see you crest that hill on a single speed. Thanks to Tim for putting together a great course, good support, and good weather. I'll put the fenders back on this week. All the best, John M.