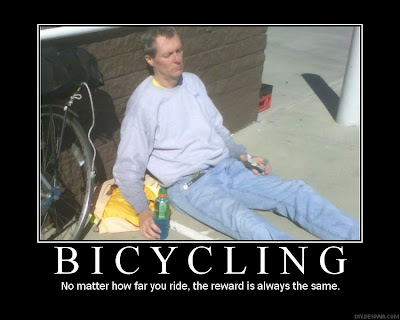 Ever been engaged in some mentally demanding activity and couldn’t wait to take your bike out for a spin? Well it may not be so easy to leave your work at work. In fact, your mentally demanding job could affect your bicycle commute home, according to an article published this year in the Journal of Applied Physiology.

The purpose of the study in the researchers’ own words . . .

Although the impact of mental fatigue on cognitive and skilled performance is well known, its effect on physical performance has not been thoroughly investigated.
Of note, the researchers suggest that mentally fatigued cyclists experience greater “perceived effort” during exercise and quit sooner.

The accompanying study press release provides a summary of the study.

When participants performed a mentally fatiguing task prior to a difficult exercise test, they reached exhaustion more quickly than when they did the same exercise when mentally rested . . .
What was the nature of the mentally fatiguing exercise?
The mental fatigue sessions began with a challenging 90-minute mental task that required close attention, memory, quick reaction and an ability to inhibit a response. After undergoing this session, participants reported being tired and lacking energy. The control session consisted of watching neutral documentaries for 90 minutes and was not mentally fatiguing.


What was the nature of the physical exercise?

After each of the 90-minute sessions – mentally fatiguing or non-fatiguing – the participants did an intense bout of exercise on a stationary bicycle. They rode until exhaustion, defined as the point when they could not maintain a cadence of at least 60 revolutions per minute for more than five seconds.

Importantly, the researchers claim that the limiting factors on performance were mental rather than relating to other physiological systems. They write:

Our study provides experimental evidence that mental fatigue limits exercise tolerance in humans through higher perception of effort rather than cardiorespiratory and musculoenergetic mechanisms.
Does this mean that cyclists should give up their after-work commute? Definitely not, according to the researchers, who assert that

. . . the study suggests that people doing high intensity training, such as competitive athletes, should do their training while mentally rested. However, people who exercise after work should continue doing so, even if mentally fatigued. Most people work out at a moderate intensity, which still gives plenty of physiological and psychological benefit, including relief from stress and improved mental performance.

In fact, a workout after a mentally demanding day at the office may be exactly what we need!

(Photo courtesy of sagittandy)
Posted by dean furbish at 10:03 AM