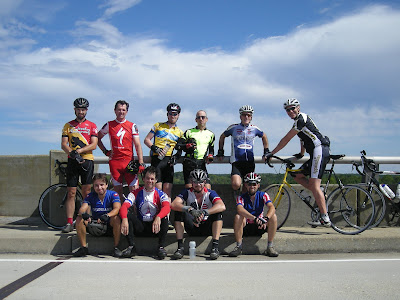 A dozen riders, lots of sun, temperatures in the low 70s. The perfect day for the Lake Loop.

And a dirty dozen it was. Along for the ride from the local rando crew: Adrian, Branson, Byron, Jerry, JoeRay, Paul, Rich and Wes. Others who joined us included two of my friends from the Gyros, Randy and Mario, and a friend of Branson’s, Chris. (We told those not signed up for the permanent that they could not assist us, and we asked them to stay off the front as much as possible. But we could not stop Mario and Randy from charging up all the hills. Animals!)

We struck out at 8 a.m. from the Stony Hill Fire Station and lost Adrian fairly early. The pace was advertised at 16-17 mph, sort of a friendly recovery ride for the riders just back from PBP. Talk about false advertising -- we finished with an average pace of 18.7 over the 130-mile course. Somebody must have opened the oat bag. This was a frisky crew.

It was fun to swap war stories about PBP. The peloton chatter, almost nonstop, was refreshing, and stood in contrast to the first night of PBP, when everybody clammed up in the predawn rain. No cyclists can hold a conversation better than randonneurs, and Sunday’s ride felt like an extended social hour.

Paul called out “À gauche” to mark one of the turns. Yes, our minds and hearts are still in France. It was clear that the bad memories of PBP are already being erased, replaced by rosier remembrances of that epic adventure -- the good food, the comradeship, the scenic towns, the smooth ribbon of pavement through the rolling countryside. Give us six months and we won’t even remember that it rained. 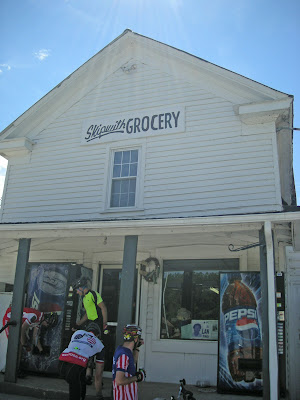 When we hit Boydton at Mile 65 everything was closed, even the one convenience store, so we rode on to Skipwith, where the drinks from the vending machine still cost $.50. Seeing the price, Joe said, “I think we’ve traveled back in time.” In fact, the entire Lake Loop, held under Technicolor blue skies, had that feel. Motorist after motorist stuck a hand out the window and … waved at us, just glad to see us out there enjoying the day. Odd. We'd traveled back in time and landed in a colorized episode of Leave It to Beaver.

We had lunch at the Subway in Clarksville, For the record, Yours Truly voted for the double cheeseburgers across the street. 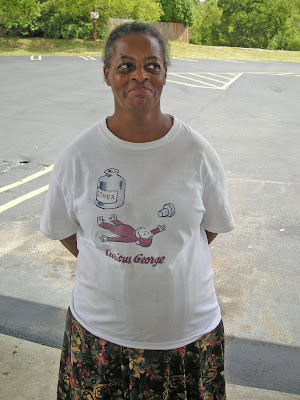 It was in front of the Subway where I snapped this picture of the woman in her Curious George T-shirt. Awesome! Where can I get one?

The wind turned favorable as we left Clarksville, and we motored along as a tight little team until Oxford, when we lost Branson and JoeRay. Foul play? No. They came to their senses and decided to ride at a reasonable pace. The group splintered once more on the final climb up to New Light Road, with Jerry, Mario and Randy the first horses back to the barn. That gave Jerry a new course record of 8:26. Not too shabby.

Another beautiful day on the bikes. Thanks to all.

Afterwards, several of us headed to Rudinos, a pizza joint in North Raleigh. Great minds must think alike because three folks ordered the Greek pie. Me? My mind’s not so great. I got the pepperoni. As we were wrapping up, local RBA Al Johnson dropped in and helped finish off a slice or two. Always good to see him, and we got the scoop on his upcoming wedding. The true randonneur that he is, we’re throwing him a bachelor ride at the end of this month.

With so much interest in RUSA’s R-12 award, you can count on another permanent next month. Stay tuned.
Posted by Mike Dayton at 9:30 PM