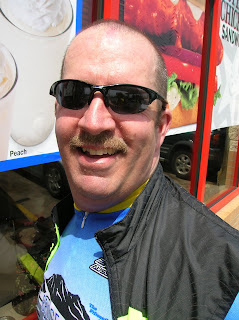 Not all of the bike clubs heading to Paris are bringing their own chef. But North Carolina has Keith Gardiner, the department chair of the culinary program at Guilford Technical Community College.

Even for chefs, sometimes simple is best. Keith says he likes PB&J sandwiches while on the bike. And off the bike? Last year, he cooked 40 filets for his MS team. Quick--somebody sign him up for the N.C. Rando Nutrition Committee.

Now in his second year of randonneuring, Keith is one of 21 Tar Heel riders heading to France in August for Paris Brest Paris. We caught up with him for an e-mail Q&A about his dreams and aspirations for PBP, where he hopes to have his best ride meal yet.

How many years have you been randonneuring? Two. I started last year with the Sauretown 200 in HP, did it again this year, became a RUSA member and decided to shoot for PBP.

What got you started doing brevets? There are a bunch of riders that ride the ST 200K in High Point as a rite of spring, so to speak. I ride with a bunch of them throughout the year so I decided to give it a shot. I love a challenge.

What was the longest ride you’d done before your first brevet? 116 miles

What’s your motivation in heading over to Paris Brest Paris? I was doing the ST 200 this year. Ended up out on the road by myself with a lot of time to think… and said I can do this… or at least give it a shot. So I decided to find out where all the qualifiers were and that is what led me to meet all of you in the Morrisville series.

Any time goal in mind? 80-ish is what I’m thinking now.

What book/music, if any, are you taking to Paris? I will bring my iPod that is fully loaded with everything 1,500-plus songs, books on tape and such. I will bring a France sightseeing book and a Bible.

How has randonneuring changed you? It has made my ass a lot sorer.

Best meal during a ride? I eat anything, but I do not like to eat too heavy while riding. I like bananas, sandwiches of all sorts. PBJ travel well… others you have to get along the way. I’m hoping my best meal during a ride will take place somewhere in France… I have yet to experience it. However last year for the tour to Tanglewood a MS fundraising ride, I brought the grill and some filets and fed the whole team, about 40 people Filet, corn on the cob, salad, Savoyard potatoes, bread and a fresh vegetable medley to tide them over after the first day of riding. So I guess that has been the best so far.

You’re a chef. What’s your best dish? I love to cook anything Italian or ethnic. I do not specialize in any one dish. Having been a Chef in the industry for 17 years I have many great dishes… then having been a chef educator for the past 13 years I have perfected many. I can do it all. I am trained in Classical French cuisine so I am really looking forward to this trip. I prefer hot food, entrees, app’s, soups and sauces, but I also teach cold food, ice carving, sausage making, smoking & curing… you name it, I can do it when it comes to a kitchen.

Favorite randonneuring memory? Getting in out of the rain at White Lake this year… boy was that a welcome stop!!!

What’s the last song you had stuck in your head during a ride? Collective Soul, Simple… I was listening to it on my iPod during the last ride. Great beat to get you up those hills.

Have any other obsessive hobbies we should know about? I like woodworking, gardening and of course cooking… but that is far more than a hobby.

Which is worth more: your car or your bikes? My bike, by far!
Posted by Mike Dayton at 8:51 AM