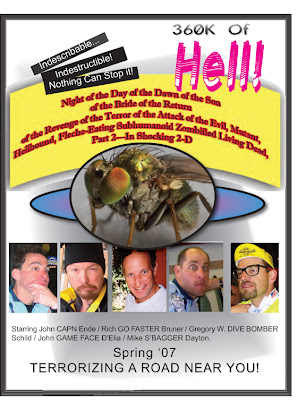 We were 65 miles into our 232-mile roundabout trek from north Raleigh to Lexington, NC.

The team had been riveted to the TV in the corner, which was turned to the Weather Channel. An earlier forecast of cold and cloudy, with a 30 percent chance of showers, had turned sinister.

Now it was a 70 percent chance of rain in the darkest morning hours, with snow showers likely by dawn. A low of 27. 15-25 mph winds. Where had this come from? Just what kind of curve ball was nature trying to bean us with?

Then Ende pointed to the sign on the wall. Perseverance.

For the first time, Team N.D.D. took a hard look around. Rose’s had lots of those painfully motivational signs. The ones sales teams and real estate agents are so fond of. You’ve seen ‘em. They usually have a color-soaked landmark shot -- say the Golden Gate Bridge poking through a dense fog -- with a simple, jingoistic word to live by: Vision. Attitude. Courage. Commitment. Character. 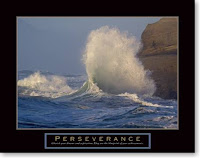 We mocked them all, each and every slogan. Had a good laugh over cheeseburgers and fries. Haha. Stupid signs.

Later that evening, those signs would come back to haunt us -- like a recurring case of athlete’s foot -- as a midnight rain poured an icy pitcher of water into our shoes and soaked our jerseys, when the heavy splatter of spring snowflakes obscured our way, when we shook and shimmied and shivered at the Liberty Kangaroo.

When Team N.D.D., to a man, made the decision to quit, hang it up, throw in the towel or at least find a dry one.

Try this slogan on for size: Abandonee.

But I’m getting ahead of myself.

The team went on hiatus for three years while memories faded, egos healed and lawsuits settled.

When the team members contractually agreed to a reunion tour, the major sticking point was the new team name. After heated debate and the exchange of several defamatory e-mails, the team settled on a moniker, suggested by Capn, that tripped off the tongue and fell over the lips:

Night of the Day of the Dawn of the Son of the Bride of the Return of the Revenge of the Terror of the Attack of the Evil, Mutant, Hellbound, Flèche-Eating Subhumanoid Zombified Living Dead, Part 2, In Shocking 2-D!

Catchy, no? Imagine the team’s chagrin when they later learned the name was not an original creation of Ende’s but had, in fact, been unceremoniously “Ripped Off,” with hardly a single word disturbed, from a wikipedia listing.

Come game day, the team gathered at the Stony Hill Rural Fire Department, just north of Raleigh. Always ready to carpe the diem, the boys climbed aboard the hay-stuffed carcass of a burned-out car for a photo op. 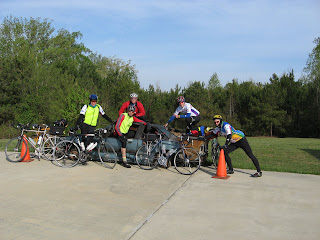 The team rolled off at the crack of 9:15 when it became clear that the last chance for a partial refund had passed.

Within 1.5 miles, history repeated itself. Just as he’d done in 2004, S’Bagger claimed the first county line sprint, catching his teammates asleep at the wheels.

The crew motored north with more yammering than hammering. The day was cold but the sun was up, the leaves were out, the wind was light. Life was good and plenty and available in two flavors: original and root beer.

After skirting Oxford, the team N.D.D. route shirked Virginia and crossed over Kerr Dam, where the boys stopped for a combination photo op/nature break. (Wallet-sized prints can be purchased in the team store.)

At around 12:30, the team hit the Boydton town limits. It was there, at Rose’s, that the boys first caught wind of the ominous weather report.

After careful deliberation, the team agreed that “everybody talks about the weather, but nobody does anything about it.” The team also decided, by a 3-2 vote, on a “wait-and-see” approach (the minority position had lobbied for immediate panic).

The team unanimously rejected, as unreasonable and cost-prohibitive, Game Face’s suggestion to rent a snow blower.

The weather held as the team swept westward into Skipwith and the Clarksville control, before bending south and back into the Tar Heel state at Virgilina. The smooth road surfaces that the team had grown accustomed to gave way on Dirgie Mine Road (as in "you've got a dirgie mine"). Eye teeth rattled loose.

After a water/snack stop in Surl, where every other customer seemed intent upon buying as much beer and beef jerky as they could carry at one time, the boys pushed into Mebane, arriving about a half-hour after the sun called it a day and retired to the barcalounger.

The team had picked Martinhos as the control and dinner stop, but the place was crammed to the gills with teenagers. Tired, cold and sweaty, and in no mood for the stench of youthful optimism, members got their cards signed and pushed up the street to Pomadoros (loosely translated: “Tony’s Rib Joint”).

No sooner had we sat down than Go Faster managed to piss off our waitress, LaToya. Something about teabags, I didn’t catch it all. The upshot was that LaToya lost my order and I had to wait an extra 15 minutes for my meal, digesting my liver, while everyone else ate their ribs. Except Dive Bomber, who ordered the crab and pepperoni shells.

We finished dinner around 10 and pulled on all the warm clothes we had. One look at the dense gray sky and the wind, now scuttling in from the northeast, confirmed our fears: the night was about to turn from cold to emotionally abusive.

This I can live with, I thought. Some of my best friends are stutterers. Only two hours to Liberty, our next control.

The light rain did not last long. About 30 minutes. Then came the heavy rain, followed by a steady deluge. Meantime, the temperature, previously hovering around 35, lost an engine and nosedived to 33.

About five miles out from Liberty, the snow started. Big, wet, ugly blinding flakes. The exact opposite of the "New England Winter" postcard. I could feel the rain streaming into my left shoe, the newspaper bag I’d been using for insulation capturing a big swimming pool of ice water.

Some teens cruised by in a Chevy. One of ‘em leaned out the window and yelled: “BICYCLING IS FUN!” I thought I recognized the car. It had been parked outside Martinhos earlier that evening.

We made it to the Liberty Kangaroo, stashed our bikes and scurried into the warmth and the light.

Tammy was working the graveyard shift. She’d been expecting us, but she hadn’t signed on for the wet rats that high-tailed it to the hot chocolate and coffee machines. Tammy set out stools and a folding chair. We left grateful puddles on the linoleum.

I’m not sure who uttered it first, but it had the ring of magic. Abandonee. The word became our mantra, our raison d’etre, the new kid on the block. We weren’t quitting. We were on a much more noble course. We were ABANDONING. We’ll take Option C, please. It made perfect sense. It was unsafe to continue. Too dangerous. Too cold. Too everything. And surely, all five other flèche teams would be right there with us. Only a damned fool would ride on in these conditions.

Satisfied with our plan of action, I ate a bowl of instant jalapeño cheddar noodles. They had the taste of a hollow victory.

The problem was, we couldn’t figure out how to abandon. We were too far from somewhere to rent a car. Team meeting. Who did we know? What friend within a 50-mile radius could we call to come collect one or more of us at 2 in the morning? Clearly we weren’t thinking clearly -- no one has friends like that.

We made two or three runs at Tammy and her white Ford Taurus, which was parked curbside out front.

Would she consider loaning her car to us?

We tried to sweeten the pot. How about $50? What about that?

Can’t do it, Tammy said. She was on to us now. We were after more than just another bag of Doritos. She began avoiding direct eye contact. Tammy and her Ford Taurus were out.

We began scoping the customers that straggled in. Most were on a serious mission, motivated by the cut-off time for buying beer. Almost all left lugging massive 24-packs with a built-in handle. Not the best candidates for a rescue, frankly.

A heavy snow was still falling outside. We stared dejectedly into the puddles at our feet. I looked more closely. The linoleum needed replacing.

Tammy had mentioned a laundromat about a mile down the street. No way will that be open, we said. We’re doomed.

But Game Face said he’d go check it out. We waited for his return, watched four or five cases of beer walk out the front door.

Game Face returned. The laundromat was open. He’d checked. Even went in the door.

Suddenly, Hope appeared and body-slammed Abandonee to the floor. What was this -- you mean, we might actually finish this thing?

D’Elia grabbed two rolls of quarters. We said toodles to Tammy and headed over. The laundromat was downright humid. We got busy, stripping off everything we owned. I took note of the security cameras in the ceiling, wondered how long it would be before the sheriff cruised up, busted the whole lot for indecent exposure.

The local headline would tell the entire sordid story: “5 Id-yots Caught BUCK-NAKED at the Laundromat. With NO CLOTHES ON!”

How we would explain that to our kids and our wives? Would we get royalties if the footage appeared on "Cops"? 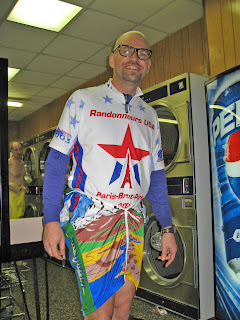 For the next 30 minutes, we jammed quarters in the slots, watched the black lycra go round and round in glorious circles. Pulled em out from time to time, watched the steam waft off of the riding shorts. Smile and smile and smile. I put my dryer on high until the entire load was toasted.

Rich tried to put a pair of his socks in with mine. Nothing doing, I said. Here’s a quarter. Go get your own dryer, I told him. I knew where those socks had been.

The rest of the ride was pretty uneventful. The sky lifted, the moon poked through, the roads dried. Highlights from the last 50 miles: Standing in the 24-hour McDonald’s Drive-Thru in Randleman eating an egg, sausage and cheese biscuit at 4:30 in the morning. Riding a bike straight through the automatic doors of the Wal-Mart. Eating the All Star breakfast at the Waffle House in Thomasville.

We rolled into the finish at 8:30 a.m., tanned, rested and ready to do it all over again.

All it took was a little Perseverance. 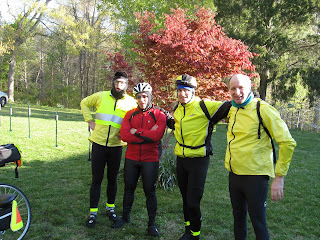 A laudable fleche experience for sure!!!

And here's one of my favorite sites:
Despair, Inc.